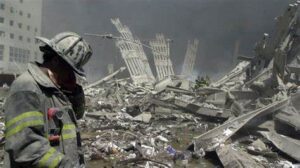 Forgive me for shilling for a TV show. I can’t resist the urge to do so.

“60 Minutes” premiered its new season tonight by telling a single story during the course of its hourlong broadcast.

It told the story of heroism on 9/11. The heroes were the firefighters who answered the call when the jetliners flew into the Twin Towers.

If you are able to watch it On Demand, I encourage you to do so.

CBS News correspondent Scott Pelley interviewed many surviving firefighters, children of those who died in the chaos, colleagues of those who perished. They all told the same story. The firefighters who died when the towers collapsed did so because they were faithful to their oath to “protect and serve” the public.

These men and women accounted for 343 deaths on 9/11, the number of New York City firefighters who died because they ran into the flaming buildings.

It was a compelling news report on arguably the most compelling event of the 21st century.

If you can, I urge you to watch it. All of it. Moreover, be prepared to swallow hard.