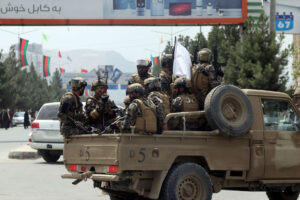 As the United States moves into a post-war world now that it has pulled out of Afghanistan, the Biden administration is left to extinguish right-wing-generated rumor-mill hot spots.

Such as the one about us supposedly leaving $83 billion worth of military equipment for the Taliban to use, possibly against Americans or our allies.

The rumor is false.

That won’t stem the fake news coming from the mouths of conservative politicians and media personalities. They keep harping on the equipment left behind. They suggest that the Taliban is now the second-best equipped military force in the world — behind the U.S. of A.

According to The Associated Press:

Their $85 billion figure resembles a number from a July 30 quarterly report from SIGAR, which outlined that the U.S. has invested about $83 billion to build, train and equip Afghan security forces since 2001.

Yet that funding included troop pay, training, operations and infrastructure along with equipment and transportation over two decades, according to SIGAR reports and Dan Grazier, a defense policy analyst at the Project on Government Oversight.

“We did spend well over $80 billion in assistance to the Afghan security forces,” Grazier said. “But that’s not all equipment costs.”

FACT FOCUS: Trump, others wrong on US gear left with Taliban (msn.com)

Is that the end of it? Hardly. It only goes to underscore the public-relations battle that awaits the Biden team as it tries to keep this withdrawal in its proper perspective.