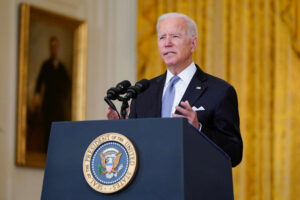 The political sniper squad is at it hot and heavy.

They are suggesting that President Biden will be a one-termer. That his “performance” in announcing the U.S. withdrawal from the Afghan field of battle has sealed his political fate. They suggest the voters have lost “confidence” in his leadership.

The president ended an unwinnable war. Our armed forces executed the evacuation of more than 100,000 Americans and Afghan allies.

We fought al-Qaeda for two decades. We killed the monstrous mastermind behind the 9/11 attack — which is why we went to war in the first place. The Taliban had revived itself long before Joe Biden took office. President Biden’s predecessor negotiated a withdrawal with the Taliban; he set a May 1 evac date, but he lost re-election in November.

President Biden was dealt a bad hand when he took office. Dare I mention, too, that his predecessor provided him with zero national security intelligence because, um, he is continuing to insist that the 2020 election was “stolen” from him?

So, for the first time in two decades, we have no Americans on a battlefield anywhere on Earth.

I could swear as well that I heard President Biden declare his intention to hold the Taliban accountable for the pledges they made in ensuring safe passage for any American still in Afghanistan who wants out. I also heard him say our intelligence forces will be on the highest alert possible for any potential terror threat that may surface in Afghanistan … or anywhere else in the world.

Lost confidence? This drama has yet to play out fully.

We have a pandemic that well could be eliminated in the months ahead. And, oh yes, our economy continues to produce jobs at a record-breaking rate.

All that said, I am not going to join the amen chorus that suggests that Joe Biden tenure as president is toast.