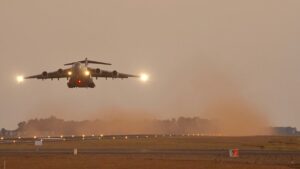 I want to share something on this blog that I just saw on another social media platform. It comes from someone who professes to have some knowledge about aviation-related matters.

I want people to think about this for a minute:
Pentagon: U.S. can get up to 30 C-17 evacuation flights out of Afghanistan each day.
16,000 people evacuated in the last 24 hours, about 11,000 of those on military flights.
Have you ever seen a C-17? I know most of my fellow aviation nuts have, but for my friends/family who have not, that is a HUGE aircraft. Absolutely immense. And the USAF is cranking out a full C-17 flight from Kabul every 45 minutes, using a SINGLE runway in enemy-controlled territory, non stop, 24 hours a day right now. This has literally never been done before in the entire history of aviation… the USAF is literally making history. They evacuated more than twice as many people YESTERDAY as we did in the entirety of the Saigon evacuation in 1975.
Anyone who wants to pop off about this being a failure needs to shut their piehole unless it’s to commend the incredibly hard working men and women of the US Air Force, and the ground forces supporting their mission. It started rough, no denying that, but in less than a week, the situation has been stabilized and the mission exponentially increased to a tempo never before seen, not even during WW2. The part that gets me is the logistics of supporting this mission – the ground crews are going full throttle right now, bringing in fuel, oil, fluids and servicing the aircraft as best and as fast as they can. What they are achieving right now is nothing short of incredible.
Thoughts to ponder. Yes?
johnkanelis_92@hotmail.com
Tweet

One thought on “Evac strategy is working”