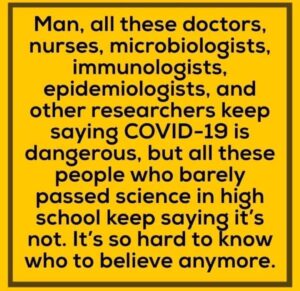 Oh, how I enjoy these messages that pop up on my various social media platforms. This one showed up today and I just had to share a thought or two about what it tells us.

It tells me that contemporary society has chosen to dumb itself down and believe the know-nothings who say what we want to hear and ignore the experts who tell us what we need to hear.

The coronavirus pandemic has killed more than 4 million human beings worldwide, more than 600,000 of us in the United States. It’s dangerous, dammit! And we don’t need brainiacs to tell us that. The brainy corps of medical experts, physicians and infectious disease researchers are on board with what we need to know about the killer virus. It is that it could kill us if we don’t take proper precautions.

Oh, and we also need to get vaccinated to ward it off!

However, the public discourse is being drowned out by the dipsh**s who continue to insist that the experts are wrong. The know-nothings to whom I refer generally populate the right-wing airwaves and fill up space on right-wing publications.

Some of the more notable blowhards — Sean Hannity, Mark Levin, Tucker Carlson — can barely find their backsides with both hands. Yet their pontification is being taken as gospel by those who share their world view.

All the while, we hear from learned medical scholars — such as CDC director Rachelle Walensky and Dr. Anthony Fauci — that the virus and its attendant variants pose an imminent danger to us. The reaction among too many of us? Nothing, man!

The 45th president of the United States brought a lot of experts on board when the pandemic first took hold. They provided him with sound advice. He chose to ignore most of the advice given to him by the likes of Fauci, Dr. Deborah Birx, CDC director Robert Redfield and Surgeon General Jerome Adams. He called some of them “idiots.” He spoke the language of the fellow know-nothings.

They continue to outshout the actual experts at this moment. That is to their shame and their disgrace. It’s also to the disgrace of those who choose to heed the morons who don’t know what the hell they’re talking about.

You may count me among the know-nothings. Which is why I choose to listen to the advice of the experts.