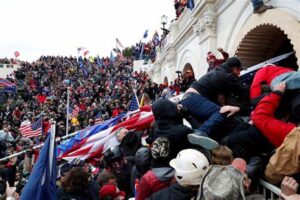 You might recall how POTUS 45’s senior policy adviser referred to “alternative facts” as they regarded the size of the inaugural crowd on Jan. 20, 2017.

Here we are, more than four years later and the ex-POTUS’s corps of cultists are wrapped in an alternative reality as the House select committee commences its hearing into the insurrectionist riot of Jan. 6.

The House panel, comprising Democrats and Republicans, are going to sift through a mountain of facts relating to what the entire world witnessed on that horrible day.

However, I fear that none of those facts will sink in to the noggins of the cultists who continue to believe The Big Lie that POTUS 45 spews forth, the lie that sparked the riot of Jan. 6.

What I witnessed that day was an all-out assault on our democratic process. The terrorists sought to prevent the certification of the 2020 presidential election and hand the presidency back to the Insurrectionist in Chief who lost to President Biden.

The alternative reality will be a difficult wall to knock down. I sincerely wish the select committee well as it pores through the evidence we all witnessed in real time.

One thought on “Alternative reality vs. the truth”