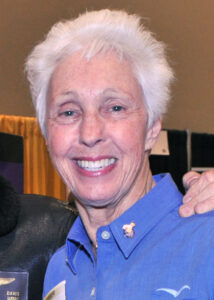 She goes these days by the name of Wally Funk. She became a household name this morning when she rocketed for a few moments into space aboard Jeff Bezos’s rocket that took off from the Trans-Pecos region Texas.

Why is she my hero? Because as a boy I was keenly interested in the space program created during the Eisenhower administration, developed later during the Kennedy and Johnson administrations. However, there appears to have been huge gap in my knowledge of the early years.

I did not know a thing about the women who took part in those early developmental years. Wally Funk was one of them. She trained right along with the Mercury Seven astronauts selected to be the space pioneers. Then the National Aeronautics and Space Administration canceled the women’s program. So help me I do not recall ever hearing about this program as I was being taught in public school way back then in Portland, Ore.

Wally Funk becomes oldest person to fly to space 60 years after she was denied the opportunity (nbcnews.com)

Wally Funk never got to fly into space.

Until this morning a little after 8. She and Bezos and his brother Mark and Oliver Daemen, a teenager from The Netherlands rocketed off the desert floor near Van Horn. They zoomed to the edge of space. They were weightless for a few moments. Then they returned.

She trained right along with the Bezos brothers and Daemen. Jeff Bezos joked that just as Wally Funk outperformed her male colleagues in the late 1950s and early 1960s, she did the same while training for the rocket ride aboard the Blue Origin ship named New Shepard.

What’s important to note here is that Funk now is the oldest person to fly to space. She broke a 23-year-old record held by a fellow who flew as part of the Mercury program in 1962 and then took part in 1998 as a crew member aboard the shuttle Discovery. You’ve heard of this guy: the late John Glenn. As an aside, I still get chills when I watch the shuttle blast off with Sen. Glenn aboard and the NASA communicator announces the launch of the ship carrying “six astronaut heroes and one American legend.”

However, as of this morning this intrepid pioneer is my newest hero.