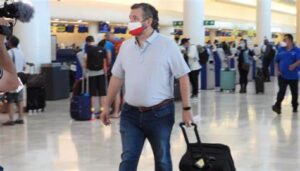 Texas Republican politicians are having a high time criticizing their Democratic legislative colleagues for leaving Texas intent on preventing a Republican-led effort to suppress Texas voters’ access to polling booths.

But … where is U.S. Sen. Ted Cruz? Is the Cruz Missile going to weigh in? Oh, wait! He has his own bail-on-Texas cross the bear.

This is the nitwit who sought to high-tail it to Cancun, Mexico in February while the rest of us were freezing — many of us to death — in that monster winter storm. He came back home when the fecal matter hit the fan, then tried to explain his way out of the jam into which he had inserted himself.

So, go ahead, Sen. Ted Cruz. Tell us all why you think Texas Democrats are shirking their duty.

One thought on “Well, Ted … your take on Dems’ bolting the state?”