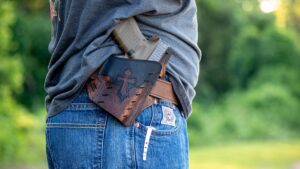 OK. I shall remain opposed the legislation that will become law effective Sept. 1.

However, I am going to enter a new phase of opposition. I want to give “permit-less carry of handguns” a chance to work until – or if – my worst fears become a reality.

Texas Gov. Greg Abbott signed the bill into law the other day. It is the “constitutional carry” legislation that became a favorite of legislative Republicans. It allows anyone to pack a gun without even requiring them to take a mandatory gun safety course and passing a mandatory test. The state has had a concealed carry law on the books for decades. This new law renders the concealed carry law moot.

The Legislature did tweak the bill before sending it to Abbott’s desk.

According to the Texas Tribune: Before approving the bill, the Senate tacked on several amendments to address concerns by law enforcement groups that opposed permitless carry, worried it would endanger officers and make it easier for criminals to get guns.

The compromise lawmakers reached behind closed doors kept intact a number of changes the Senate made to the House bill, including striking a provision that would have barred officers from questioning people based only on their possession of a handgun.

The deal also preserves a Senate amendment enhancing the criminal penalties for felons and family violence offenders caught carrying. Among other Senate changes that made it into the law was a requirement that the Texas Department of Public Safety offer a free online course on gun safety.

Big-city cops opposed the law along with most Texans. So I don’t feel like the proverbial Lone Ranger in fearing what this law could produce, which could be a spasm of violence created by those who are packing heat under the new law.

To be fair, I had much the same fear about concealed carry legislation. To my pleasant surprise, the concealed carry law has not produced a huge tick in gunfights on the streets, or in the grocery store parking lot – or anywhere else, for that matter!

I am going to hold out hope that this new law can produce the same sort of reasonable reaction.

Will it turn me into an avid supporter of this law? Probably not. I am willing to honor the role as someone who accepts the law if not embracing it.

I will simply hope for the best.

Note: This blog was published initially on KETR.org.