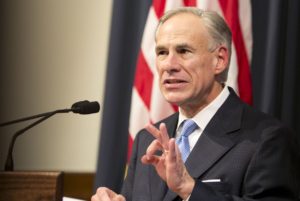 Call him the latest incarnation of the “Macho Man.”

Gov. Greg Abbott thinks he is going to take matters into his own hands by ensuring that Texas builds a wall along its entire border with Mexico. The details are to come later. If ever.

This one gives me trouble.

Why? Because border security is a national issue, not one left to states to determine individually. There well might be a constitutional issue involved with Texas deciding to go it alone in fencing off the state from its southern neighbor.

Texas governor says Texas will build its own border wall, leaves the details to later (yahoo.com)

I get that Abbott wants to arrest criminals who come here to do bad things. He made that point clear and in fact I happen to agree with that part of Gov. Macho Man’s proclamation. I don’t want to see the state infested with — in the words of the former POTUS — “rapists, murderers, drug dealers” either. Then again, there isn’t much evidence that such an infestation is occurring anyway with refugees fleeing their home countries in search of a better life in the Land of Opportunity.

Yahoo News reports: The ACLU of Texas disagreed. Abbott’s plan undermines the federal “right to seek asylum by jailing those fleeing danger and punishing them for seeking refuge in the U.S,” said ACLU staff attorney Kate Huddleston. “In this plan, Abbott is yet again scapegoating immigrants in an effort to distract from his own failures in governing and managing actual crises in Texas — like the historic winter storm that led to the deaths of more than 150 Texans — with cruel results.”

Abbott, of course, blames President Biden for the border crisis. Imagine that, eh? The governor well might seek to succeed the president in 2024, so he needs a campaign issue on which to run. It strains credulity to believe that none of this existed during Biden’s Republican predecessor’s term in office. It certainly did. Where was the criticism then? Hmm, governor?

Gov. Macho Man will need to strap on his flak vest and helmet as he takes incoming criticism from those who are going to question the wisdom of usurping what looks to be a federal job.