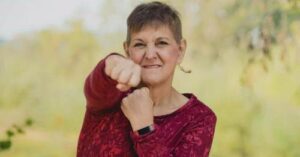 This photo sums up what I believe is lacking in today’s troubled and topsy-turvy world.

That would be grit, coupled with determination. Throw in some raw courage and unbounded optimism.

The photo you see is of my late cousin Becky Olson. She died in late April of cancer. She had five recurrences of the disease.

I have spoken already on this blog about her. I left a couple of things unsaid. So, here goes.

Becky chose not to wallow in self-pity when she received her diagnosis. Yes, she surely was saddened and frightened. However, she powered through her treatments. She lived on.

Instead of feeling remorse and sorrow over her condition, she chose instead to co-found an organization called Breast Friends. She used the foundation as a platform to reveal to the world an immense wellspring of courage. She imparted that courage to others suffering from cancer. She became a motivational speaker, parlaying her singing talent and remarkable stage presence into a presentation that she gave all across the country. She wrote a book, “The Hat That Saved My Life,” which tells of her struggle.

What is lacking today? Much more of that kind of boundless energy. Becky presented an optimistic view of this world and of life. Did she have her moments of angst, anxiety and fear? Of course she did! However, none of that deterred Becky from the mission she was dedicated to completing until the very end of her journey on this good Earth.

She was the voice of hope. How in the world does one go through this life without it?