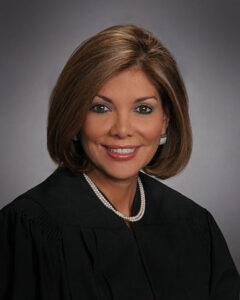 I might have spoken a bit too soon in lamenting the lack of legal standing among politicians seeking to become Texas attorney general.

Texas Supreme Court Justice Eva Guzman is about to become a former justice … with an eye toward running for Texas AG in the 2022 Republican Party primary. Her last day on the state’s highest civil appellate court is Friday. Then what?

Justice Guzman represents a tremendous boost in the legal credentials of a political candidate seeking to become the state’s top law enforcement officer.

The incumbent Ken Paxton wants a third term. Texas Land Commissioner George P. Bush has declared he wants to defeat Paxton in the 2022 GOP primary. Both men have, shall we say, sparse legal cred. Paxton has been indicted for securities fraud and is awaiting trial; he also is the subject of a FBI probe into allegations of criminal wrongdoing in his office. Bush has a limited legal career under his belt, but has served as land commissioner for the past six years.

Now we have Guzman. She is the daughter of immigrants from Mexico. She grew up in Houston. She attended the University of Houston and got her law degree from Duke University. She has served on the state court of appeals and has been named appellate judge of the year.

To be clear, she hasn’t declared her attorney general candidacy.

At least not yet. Stay tuned.