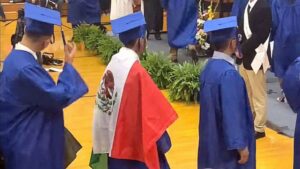 Ever Lopez has his high school diploma.

He got it today after a weekend story raised a ruckus over the North Carolina high school’s decision to keep the diploma from going to the student who violated a dress code policy during the commencement ceremony.

The story grew some wings. From my standpoint, Lopez made a mistake and he should have been sanctioned by the school.

Lopez sought to walk across a commencement stage at Asheboro, N.C., wearing a Mexican flag draped over his graduation gown. He wanted to express his pride in his heritage, as he and his parents emigrated to the United States from Mexico. Fine … except for this little thing: School policy prohibits students from covering their gowns in that manner.

Lopez could have honored his birth nation with a emblem plastered on his mortar board; Asheboro school district policy allows that. Lopez, though, sought to take it a step further.

He walked across the stage, reached for his diploma but an assistant principal pulled it back.

Lopez and his parents have demanded an apology from the school district. Mom and Dad want to get to the bottom of the kerfuffle. My question is this: What the heck for?

Why is that so difficult to understand?

Well, it’s not difficult. Ever Lopez sought to make some sort of statement. Maybe he just wanted to defy authority.

Memo to Ever Lopez: That kind of strategy ain’t gonna work when he launches his career in whatever field of employment he chooses. Someone sets the rules; you follow them or you’re out.