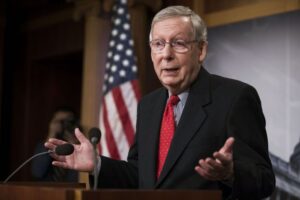 The effort to form a bipartisan commission to examine the cause and consequence of the Jan. 6 insurrection is not intended to “re-litigate” the event.

Its intent is to establish the whole cause and to work toward ways to prevent such a thing from recurring.

Donald Trump incited the riot that sought to overturn the 2020 presidential election. The ex-POTUS fueled the anger in the mob assembled in front of him that day by declaring the election had been “stolen.” It wasn’t. President Biden won the most “secure election in history.”

McConnell, the Senate Republican leader, is playing politics with what should be a bipartisan/nonpartisan effort. Police officers were injured as they sought to fend off the mob. One of them died during the melee; another one took his own life.

McConnell is shaming himself, his office and the federal government he swore to protect and defend.

One thought on “No need to ‘re-litigate’?”