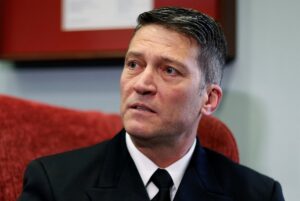 The individual who now represents the congressional district where I lived for 23 years has established himself as a first-rate a**hole.

Republican Ronny Jackson said this via Twitter: Fauci and Democrats have been covering for China for over a year about the origins of this virus. They’ll badmouth America any chance they get, but with China, they’re SILENT. Wonder why that is??

This guy is a menace. To think that he gets to vote on laws that affect all Americans, not just those in the Texas Panhandle — where he moved to run for Congress in 2020 after spending his entire adult life far away — is reprehensible on its face.

He succeeded Republican Mac Thornberry, who served the district with dignity for 25 years, even though I rarely agreed with his politics. Jackson has taken to Twitter to taunt Democrats, just like his hero, Donald J. Trump.