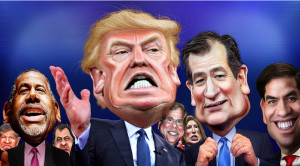 This question needs asking: What in the world has happened to the Republican Party?

It was hijacked decades ago by conservatives who grew weary of the party’s longstanding tradition of liberal thinking, of outreach to racial minorities, even of reasonable fiscal restraint and limited government interference.

It now has become a cult of personality. A once-great party is driven by its belief in the lunacy of the Big Lie, that an election was stolen through something they call “rampant vote fraud.”

The cultist who leads this moronic notion is Donald Trump, a former one-term president who actually incited a mob of terrorist rioters to overturn an election he lost.

As CNN’s Fareed Zakaria has noted in a special on his cable network, “Trump is gone” but his movement lives on.

Yes, this is the party that Trump once led even though he lacked any knowledge, let alone experience, in political life.

In an odd way, today’s GOP has switched places with what used to constitute the bulk of the Democratic Party. The old Democrats — particularly in the South — was populated by segregationists who resisted efforts to grant equal rights to black Americans. That version of the Democratic Party did not adhere to the loony notions of an individual, however, the way that the current Republican Party has glommed onto the imbecilic notions pitched by The Donald.

It is distressing for me to watch this devolution of a once-great political party. I say that as someone who hasn’t yet voted for a Republican for president. I go back a ways, having cast my first presidential vote in 1972.

Now that I am older, I could be persuaded to vote for a Republican for the nation’s highest office — except that the party is an extension of what is now being called “Trumpism.”

It is a horrible — and horrifying — fit, to be sure.

3 thoughts on “What happened to GOP?”