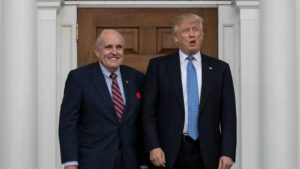 The shocking decline in stature of the man once known as America’s Mayor has my head spinning to this day.

Rudy Giuliani once stood tall as a hard-charging federal prosecutor in New York City, then as that city’s mayor, then as a Republican primary presidential candidate.

Time magazine named Giuliani as its Person of the Year in 2001 because of the stout leadership and compassion he exhibited as his city sought to recover from the 9/11 terror attacks.

What the hell happened to this fellow?

FBI agents raided his office and his residence this week looking for evidence in a long-standing investigation by the Southern District of New York into whether he violated lobbying laws while working on behalf of Ukraine. He has tied himself tightly to Donald J. Trump, becoming the ex-president’s personal lawyer and chief apologist.

Giuliani’s conduct during Trump’s two impeachment trials and all the period between them and throughout much of Trump’s term in office has been mind-boggling in the extreme.

Now he is being investigated by a Justice Department agency, which brings me to the most vivid irony of all. Giuliani earned his stripes while heading the Southern District of New York … which now is hot on a trail that many observers believe will lead to an indictment of the one-time America’s Mayor.