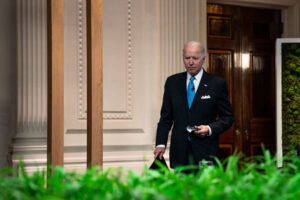 President Ronald W. Reagan stood on the Capitol steps on Jan. 20, 1981 and declared that “government is the problem.”

President Joseph R. Biden stood inside the House chamber on Wednesday night and said, well, something quite different, that government can repair what ails many Americans.

So it is that the “era of big government” is returning to the forefront of American life. I have slightly mixed feelings about that, although I do endorse much of what President Biden wants to bring to the lives of Americans ravaged by a global pandemic and the economic hardship that accompanied it.

I endorse Biden’s call for comprehensive immigration reform. I believe the government needs to make permanent the Deferred Action on Childhood Arrivals program — which lends a hand to those who were brought here illegally as children by their parents.

The nation’s infrastructure as Biden has defined it needs government help. I endorse the president’s plan to tax the wealthiest Americans more to pay for much of his big agenda.

Free community college for every student? Hmm. Not sure about that one.

Climate change poses an existential threat to our national security and, yes, government has a role to play in stemming the impact of the change on our fragile planet.

Joe Biden’s speech Wednesday night wasn’t a stemwinder. It didn’t move Americans to jump into the fight fully. It was, however, far from the dark, forbidding speech that Donald J. Trump gave at his inaugural in 2017.

Although, I do want to say that Biden’s speech did contain at least one reference that might stand the test of time, which is that the Jan. 6 insurrection was the worst such act “since the Civil War.”

President Biden has laid out an aggressive government agenda. He said that inaction is not an option, that Congress must seize the moment and act on behalf of an entire generation.

Oh, I am certain that the Republicans who occupy a hefty minority in both congressional chambers will dig in on their opposition to anything that comes from the Democratic administration. It is their modus operandi.

I stand, though, as one American patriot who welcomes the return of our federal government as a last resort to helping Americans who continue to suffer from a killer virus.