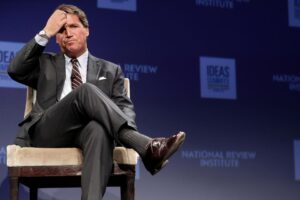 Tucker Carlson is no expert … on anything.

He hosts a show on the Fox News Channel, which I guess buys him some gravitas among millions of Americans. Therefore, it is incumbent on other commentators — such as me — to weigh in on one of the more bizarre rants many of us ever have heard.

Carlson went on a weird tangent Monday night in which he declared that parents who require their children to wear masks in this pandemic era need to be arrested for, uhh, child abuse.

What a fruitcake, man.

The criticism of Carlson’s baloney transcends the cosmic divide between liberals and conservatives. One right-wing commentator, Bill Kristol, wrote this via Twitter: The masks stuff is performative idiocy and demagoguery. But the key sentence in Carlson’s rant was this: “It’s our job to restore the society we were born in.” The destructive power of reactionary nostalgia jet-fueled by grievances real or imagined shouldn’t be underestimated.

The blowback from across the nation was immediate. Forbes wrote: It began after Fox News’ Tucker Carlson on Monday suggested it was “unacceptable,” “dangerous” and even potentially “illegal” for children to be forced to wear face coverings outside. Carlson further said that viewers should report such sightings to the police or child protective services, even as it is still recommended that masks be worn at all times by the Centers for Disease Control and Prevention.

It all gives me pause to wonder how in the name of parental discretion can this guy be taken seriously? Here’s the tough answer, which is that millions of Americans do listen to the bluster, bloviating and bellowing from loudmouths such as Tucker Carlson.

I need to stipulate once again this point, which is that Carlson has no particular standing as a childhood behavior specialist. He is just a guy with a large audience of devoted followers who are going to high-five each other when they hear the crap flowing from this individual’s pie hole.

Tucker Carlson has, in the well-aimed words of one progressive critic, “lost his mind.”