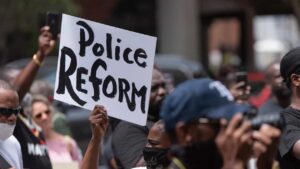 As a “good government progressive,” I feel the need to weigh in on an issue that is beginning to get some traction, particularly in light of the conviction of Derek Chauvin in the murder of George Floyd.

It’s the issue of police reform and whether Congress should enact laws that dictate how local police departments should do their business.

I don’t consider that a level of “good government” by the feds. Congress would be well-advised to keep its hands off what is fundamentally a local-control issue.

Floyd’s death while being arrested in Minneapolis for passing some fake currency was a shocking reminder of how cops can go rogue and how the consequences of their actions can cause such tragic results. A jury convicted Chauvin of second- and third-degree murder and of second-degree manslaughter. He is likely to spend many years in prison.

Police departments answer to local governing authorities. City councils or senior city administrators have the final say over how the cops should do their job. They hire police chiefs, who then administer policing rules and regulations for their officers to follow. The burden must remain with them — not Congress — to determine what is correct and proper. If the voters in their cities, counties and states don’t like the way these matters are being handled, they can take measures to rectify the situation.

And yet some zealots are pushing Congress to enact federal laws that prohibit certain policies. No, Congress should stay away from that particular discussion and let local communities have their say.

I, too, am horrified at what has been happening in communities across the land. Too many police officers are acting badly when arresting racial minorities. The result, such as what happened to George Floyd, have occurred with shocking regularity.

It must rest with those communities to repair the damage being done and to find permanent repairs. Congress need not get involved in what belongs to others to resolve.

One thought on “No federal rules on policing”