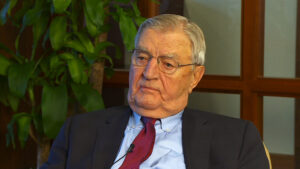 The modern U.S. vice presidency has as its godfather a man known as Fritz. That would be Walter Mondale, who today died at the age of 93.

Say what you might about the likes of Democrats Al Gore and Joe Biden who came along after Mondale’s single VP term during the Jimmy Carter administration. Then we have Republican Dick Cheney.

All those men left their imprint on the vice presidency, too. They became key policy advisers to the presidents they served. Thus, the well-known phrase that former VP John Nance Garner attached to the office he occupied during Franklin Roosevelt’s first two terms as president, which he said wasn’t worth “a bucket of warm pi**,” no longer was relevant to the office.

Then came Mondale’s historic choice of a woman, Geraldine Ferraro, to run as vice president along with him as the Democrats’ presidential nominee in 1984. They lost in a historic landslide to President Reagan and Vice President George H.W. Bush.

Ferraro was the first woman to run on a national ticket. Republican Sarah Palin would run as VP in 2008 with Sen. John McCain and, of course, Kamala Harris would be elected vice president in 2020.

There you have it. Walter Mondale made history by rewriting the vice presidency and then made it again by starting to clear away the obstacles that kept women off the national ticket.

Fritz Mondale was a great man and a dedicated public servant. May he rest in eternal peace.