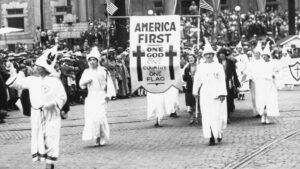 In the stunning but not surprising category of news items comes this report out of Washington, D.C.

A group of far right Republican members of the House wants to form a cabal, er, caucus comprising those who want to push forward a political agenda that calls attention to the Anglo-Saxon tradition of some of those who preceded us to these shores.

Why is this so pernicious? As the grandson of immigrants who came to this country in the early 20th century from Greece and Turkey, I am appalled and aghast at a provision in the draft policy statement that declares that “mass immigration” would spoil the “unique culture” built in the United States.

Now, give that a moment’s thought. This nation’s uniqueness, the way I see it, is the built on its welcoming of immigrants from around the world. The Statue of Liberty’s inscription tells immigrants that this nation embraces their arrival.

What in the name of all that is decent are the far right wingers trying to do? I think I know. They are trying to slam the door shut on people of color, on the oppressed and fearful. They want our culture to remain true to some myth that we are an Anglo-Saxon nation first and foremost.

Nothing, not a damn thing, could be farther from that version of the truth about the founding and settlement of this country.

I am heartened to see some push back from GOP congressional leaders on this frightening notion. Can they deliver a kill shot to this right wing idiocy being pushed by the Donald Trump/America First wing of the Republican Party? I am going to hope so.