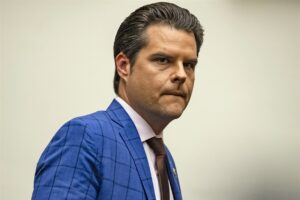 U.S. Rep. Matt Gaetz, the congressman under investigation for having sex with an underage girl, reportedly sought a pre-emptive pardon from Donald Trump before the president left office.

Trump, not surprisingly, denies ever getting the request.

Hmm. Let’s see. Who do you believe? The president who told more than 30,000 lies during his term in office and couldn’t tell the truth if it meant he would miss a Happy Meal if he lied? Or the congressman whose sole mission in Congress was to protect Donald Trump’s backside?

I’ll go with Gaetz on this one. The Washington Post reporting of Gaetz’s request for a blanket pre-emptive pardon has a certain ring of truth. Don’t you think?

Yes. Even though he insists he didn’t do anything “illegal.”

Which begs the question: Does an innocent man seek a pardon?