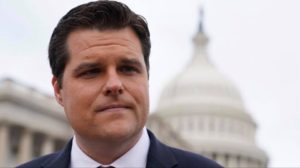 Someone once said if you want to have a “friend in Washington, get a dog.” My sense today is  that U.S. Rep. Matt Gaetz, a Florida Republican, needs a pooch if he desires to find a friend.

Friends are in short supply for Gaetz as he faces allegations of improper sexual  relations with an underage girl and — this is the worst part by far — whether he engaged in sex trafficking. Then there are reports from his colleagues that Gaetz has been showing ’em nude pics of the women with whom he has taken a tumble.

It really and truly stinks to be Matt Gaetz at this time.

Don’t get me wrong. Gaetz, who has been described as a political troll who is more interested in furthering weird causes than actually legislating, is one of the more detestable individuals serving on Capitol Hill. Media are reporting a decided lack of surprise among his congressional colleagues over what has been alleged.

Yeah, he’s got a few pals. They are fellow Donald Trump acolytes who, like Gaetz, continue to suck up to the ex-president. Gaetz is hoping, it appears likely, that Trump can parlay what little political stroke he has remaining to save this clown.

It’s instructive to me that Gaetz’s congressional communications director has quit, citing “principle” as his reason for resigning. Well, who else is going to abandon this nut job?