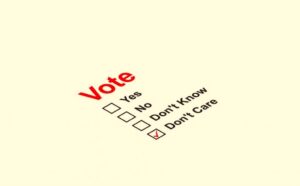 An earlier post on this blog saluted the “courtesy” that Princeton City Hall gave to its residents with a significant credit in their monthly water bill.

I intended to call attention to local governments’ ability to respond to taxpayers’ needs in time of suffering. Princeton answered the call.

Now, for my point: It is that government at the local level often is the most responsive and its actions have the most direct impact on citizens’ lives. Thus, it baffles me that local government elections usually draw such little attention among voters.

You know what I’m talking about. Voter turnout for municipal elections often languishes in the single digits. That is, fewer than 10 percent of those who are registered to vote bother to actually vote. I have witnessed this astonishing apathy play out over and over again during by 37 years as a daily print journalist. I watched it happen in Oregon City, Ore., in Beaumont, Texas, and in Amarillo, Texas, where I worked before retiring and moving to Princeton. It’s happened here, too.

Texas is going to the polls again on May 1. We will choose our city government and school district elected leaders. Will many of us even bother to vote? Hah! I am not holding my breath.

And that is the ongoing shame of our democratic process.

The 2020 presidential election produced an astonishing turnout among registered voters, something on the order of 65 percent. The raw numbers of voters, more than 158 million, also was staggering. Don’t misunderstand me. Presidential elections are important as well. However, presidents and those we send to Congress make decisions that occasionally have little to do with our daily lives.

City council members decide how much property taxes we pay; they make decisions on the quality of police and fire protection, on our parks, whether we have streets lights in our neighborhoods and, yes, whether we have potable running water. School board trustees decide how much to pay public school teachers, which has a direct impact on our property taxes, the books our children and grandchildren read, the curriculum they study.

I am not suggesting we should treat national elections with the apathy we demonstrate at the local level. I am suggesting that local races deserve at least as much of our attention as those elections farther up the electoral pecking order.