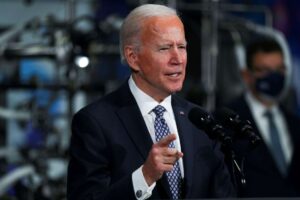 Call me naive … I suppose.

My hope for President Biden was that he would parlay his 36 years of experience as a U.S. senator and eight years as vice president into a smooth governing machine once he settled into the Oval Office.

It’s not turning out that way.

The president is staking his legislative agenda on a COVID-19 relief bill that is aimed at bringing aid to a nation struggling against a killer virus. Congressional Republicans signaled their opposition to it. The $1.9 trillion bill passed the House on a largely partisan vote; it sits in the Senate and the president hopes it will clear that body, too.

However, it appears it will take a tie-breaking vote by Vice President Kamala Harris to clear the upper chamber.

Republicans still are steamed that Biden defeated Donald Trump in the 2020 election. They aren’t giving up the phony notion that Biden somehow “stole” it from Trump. He didn’t. President Biden won fair and square.

He is trying to get the Cabinet seated. GOP senators are holding up key picks for attorney general and health and human services secretary.

The AG nominee, Merrick Garland, has to get to work reassembling the Justice Department decimated by the Trump administration; moreover, he wants to commence a key investigation into the insurrection that occurred on Jan. 6. Oh, and HHS Secretary-designate Xavier Becerra needs to get that department ramped up and working to facilitate an end to the COVID virus that is still killing Americans.

President Biden thought he could get to work immediately. He thought he could broker the friendships he developed during his years in government into a working coalition. I guess he didn’t count on the hard feelings that translates into blind obstructionism.

I will cling to the hope that the president can bring his legislative acumen to bear.