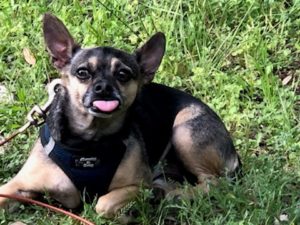 Toby the Puppy has a remarkable memory.

He once was fearless. Nothing seemed to bother him when he joined our family in early September 2014. Then we went to a Fourth of July celebration in the summer of 2019. He heard fireworks exploding and, shall we say, became frightened by its sound.

Toby the Puppy hasn’t been the same ever since.

It is stormy tonight in North Texas. The sky is lighting up. The thunder is loud. My wife and I enjoy the sound. Not our beloved puppy.

The sounds that never used to make him flinch, now send him scurrying for cover.

Bear in mind that this is the same pooch who acts tough in the presence of much larger doggie beasts. He acts — and sounds with his big, throaty bark — like the meanest Rottweiler you’ll ever hear.

However, he isn’t mean. Not at all. He is gentle and let’s not forget that he weighs about 13 pounds.

Not even a Rottweiler could overpower the sounds we’re hearing tonight. So, our puppy is in good company.

If only we could persuade him that the thunder and lightning won’t hurt him. Or us.