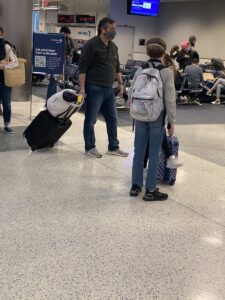 What you see with this brief blog post is a picture of U.S. Sen. Ted Cruz waiting to board an airplane.

It’s reported the junior Republican senator has jetted off with his family to Cancun, Mexico. Why is this a big deal? Because the state he represents — that would be Texas — is enduring the effects of a historic winter storm.

Millions of Texans are affected adversely by the storm. Pipes have frozen; the power has gone out; local water supply has been compromised; politicians are sniping at each other over who’s to blame; Texans are angry, miserable, hurting.

Cruz now reportedly is basking in the sun down yonder in Mexico while his state is suffering grievously.

If I were Ted Cruz — and I thank God I am not — I would have issued a press release to deny that the picture is me and that I am not vacationing in Cancun … were that the case.

His silence regarding this matter speaks volumes. Ted Cruz is shirking his duty.