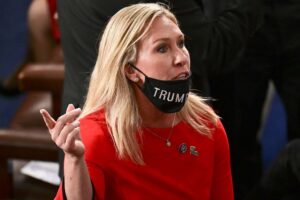 Make no mistake, I am not a Pollyanna. I know good bit about our political system, about how we can elect zeroes as well as heroes to our governing bodies.

But, oh brother, we have an astonishing number of numbskulls in Congress, taking power and being handed the opportunity to make laws that govern all of us, not just those who send them to Congress from their various states and congressional districts.

Marjorie Taylor-Greene, I am talking about you.

Rep. Taylor-Greene is the walking, talking embodiment of a domestic demon in our midst. She represents a Georgia congressional district and she is a believer in that QAnon cult that has gripped millions of Americans by the genitals.

She believes Muslims cannot serve legitimately in Congress; she has stated that the Sandy Hook and Parkland, Fla., school massacres were hoaxes; she says President Biden stole the election from Donald Trump; she has called for the summary execution of Democrats.

Yes, she is now among the 535 men and women who serve in the legislative branch of government.

She is a traitor. A potential terrorist. She is certifiably unfit to serve in a public office.

And yet … the folks in her congressional district sent her to Capitol Hill. Astonishing, yes? You know the answer. It is frightening in the extreme.

The news gets even worse. Congress contains others who hold the same view as this idiot. Oh, and the Republican leadership to which she ostensibly answers isn’t calling her, slapping her down, telling her to keep her mouth shut. They stand behind the First Amendment’s free speech clause.

I am a big believer in free speech and in the First Amendment. I also believe free speech should be responsible and shouldn’t be perceived as a threat to our very government.

This member of Congress doesn’t represent our best. She represents the worst of us.

One thought on “This isn’t our ‘best’”