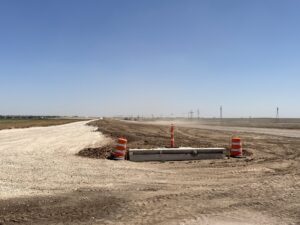 AMARILLO, Texas — We returned to a city we once called home and made a wonderful discovery.

As we hauled our fifth wheel toward the RV park where we usually stay when we visit, we came across a massive right of way under construction west of Soncy Road. It goes north-south parallel to Soncy.

I knew it was coming. I knew about plans to build this roadway. I still was struck by the scope of the construction work.

The Texas Department of Transportation is extending what is known around here as Loop 335. It’s a loop in name only. It is no such thing as a loop the way other cities have built them. The intent of highway loops is to allow traffic to speed around cities, allowing motorists to avoid congestion.

That isn’t the case with Loop 335’s western-most portion, the part that runs from Interstate 40 south to Hollywood Road. The commercial develop along the existing leg of the loop has turned Soncy into just another uber-busy street.  I drove it hundreds of times while we lived in Amarillo. I got stuck in traffic countless times over the years.

I want the loop extension to succeed. I am proud of many aspects of Amarillo, its economic development and its infrastructure. What has always puzzled me is why TxDOT built Loop 335 and then allowed it become just another busy street along its western-most corridor.

It’s not a loop now. It will become one eventually when they finish the work and then connect the western corridor with the newly finished and improved southern corridor.

One thought on “An actual loop coming?”