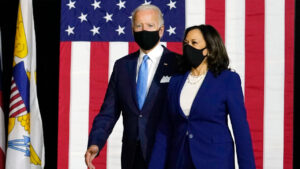 I just watched our new president and vice president on TV, interviewed together for the first time since the election.

My first  reaction? What a remarkable change from what we have endured for the past four years!

President-elect Joe Biden and Vice President-elect Kamala Harris spoke candidly, openly and thoroughly with CNN’s Jake Tapper, who I should add did not lob only softball questions at them. They spoke clearly and cleanly about whether they would allow family members to stay involved in business interests that could conflict with their roles as president and VP; they both said “no.”

And so … we are heading toward a return to the norms of the nation’s highest offices that Donald Trump has trashed.

I don’t know about you, but I am looking forward to when President Biden and Vice President Harris take their oaths of office.

I no longer want to see public policy dished out via Twitter; Biden says it won’t happen. Nor do I want to see the president bullying and pressuring the attorney general to investigate so-and-so for such-and-such; Biden says that won’t happen, either. I yearn for a return to this nation as a world leader among the nations of the world; Biden and Harris said the United States will restore our alliances.

I want the president and vice president to lead our fight against the COVID pandemic by demonstrating they, too, will wear masks and practice social distancing. President-elect Biden said he will issue a direct order as president that anyone doing business in federal buildings will be wearing masks and staying apart from each other; moreover, he pledged tonight to ask all Americans to mask up for the first 100 days of the Biden administration.

Biden believes nationwide mask-wearing will help reduce the rate of infection, illness and death. If he wants us to wear a mask, then I am going to do as he asks.

Yes, the nation is about to leave the age of chaos and confusion on the side of the road. I like what I heard tonight from the new team.