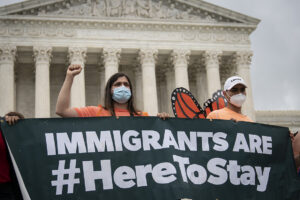 I want to look ahead to the new year, as I cannot wait for this one to disappear in the distance.

President-elect Biden got a question the other night from NBC News anchor Lester Holt: What do you want to accomplish in the first 100 days of your administration?

Biden said he intends to submit to Congress a detailed immigration reform package that he said must be done soon. It is time, he said, to improve an immigration system that has produced some horrific results, such as the separation of children from their parents when they are caught entering the United States illegally.

The president-elect already has declared his intention on Day One to sign an executive order that rescinds an earlier order that Donald Trump issued regarding the “dreamers” who live in this country. These are the individuals who came here illegally as children when their parents sneaked across the border.

Biden’s order would in effect restore an even earlier executive order that President Obama signed to protect those brought here under the Deferred Action for Childhood Arrivals program. DACA recipients were protected from immediate deportation. Trump wiped that order off the books and then threatened to round up hundreds of thousands of DACA recipients and send them back to their birth country. He didn’t care that DACA recipients have no memory of their country of origin; they have become de facto Americans.

Whatever immigration package the president-elect presents to Congress should contain a fast-track provision for DACA recipients to (a) seek U.S. citizenship or (b) seek some form of legal resident status.

Donald Trump has been listening to dark advice given him by senior (anti-)immigrant adviser Stephen Miller, a young man who appears to have little tolerance for any immigrants of any kind. Being the grandson of immigrants, Miller’s point of view offends me greatly, as does the attitude that Trump adopted during his term in office.

President Bush wanted to reform immigration policy. As did President Obama. The reform effort stalled during the Trump era.

I welcome President Biden’s effort to deliver on his 100-day vow.