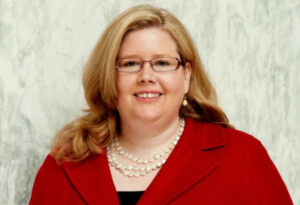 I haven’t commented specifically about Emily Murphy, who heads the General Services Administration … until now.

The GSA boss has done something she should have done more than two weeks ago, which was to begin the transition from the Donald Trump administration to the Joe Biden administration.

She didn’t. Murphy held up the transition because she believed Donald Trump’s bogus assertion about “widespread voter fraud” in the presidential election. By delaying the presidential transition this individual likely is responsible for the deaths of Americans brought by COVID pandemic. She has refused to refer to President-elect Biden by the title he has earned by virtue of his victory over Trump; what’s more, she hasn’t yet referred to Kamala Harris by her own title as vice president-elect.

However, she has directed the GSA to get started with the transition to the Biden administration. She doesn’t deserve a lick of praise. Oh, no. She has earned the scorn brought to her by folks such as me, who believe she and Donald Trump have put our democracy in peril by the refusal of Trump to concede that President-elect Biden defeated him in the election.

Emily Murphy has joined Donald Trump in the pantheon of petulant sore losers. She has made history, as well, by being the first GSA boss ever to dodge the duty she was empowered to perform, which was to certify the transition from the losing presidential candidate to the winner.

Murphy is a disgrace to the public office she occupies.