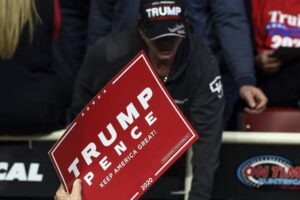 I must admit to a certain astonishment as I watch Donald Trump seek re-election as president of the United States.

It comes as I watch those members of the Trumpkin Corps continue to make excuses for their candidate’s astounding behavior. I admit to watching Trump at those rallies he stages and am shocked and amazed at how little substance he offers. Indeed, his rants and riffs are bereft of any policy initiatives.

He prances and preens in front of those adoring fans of his as if he’s a TV star … oh, wait! I forgot that he once was one once upon a time. He mocks Joe Biden because the former vice president chooses to wear a mask while speaking in public. Hey, we do have a pandemic among us that is still killing Americans by the hundreds every day.

Trump gripes about the news coverage he gets. He has taken aim at the moderator of the next “debate” scheduled for later this week with Biden, NBC reporter Kristen Welker.

And still … the Trumpkins out there think he’s just the bee’s knees, the greatest thing since pockets on shirts, the alleged “messiah,” the guy who “tells it like it is.”

They ignore the president’s failure to respond initially to the COVID-19 pandemic. They dismiss Trump’s unwillingness to challenge Russian loon Vladimir Putin for placing bounties on our American fighting men and women and paying real money to Taliban terrorists for killing them on the battlefield. They ignore his un-Christian behavior at every turn yet some of them keep suggesting that God dispatched Trump onto the campaign trail in 2016 to save the nation.

This individual has created a cult of personality the likes of which I have never seen in this great nation of ours. He cuddles (proverbially) with murderous dictators and denigrates our own intelligence professionals. Trump recently said FBI director Christopher Wray “isn’t doing a very good job” because Wray says white supremacists pose an existential threat to this nation. He challenges the expert advice given him and the nation by the world’s pre-eminent infectious disease guru, Dr. Anthony Fauci, who – for the life of me I don’t understand this – continues to serve at the pleasure of this goofball.

Through it all Trump sways the faithful who just cannot bring themselves to acknowledge what the rest of us have seen all along. It is that their guy is as phony as they come.