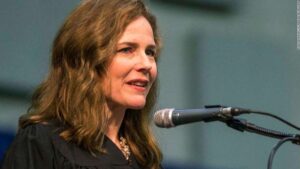 So, you thought that Muhammad Ali and Joe Frazier engaged in the Fight of the Century way back in 1971, yes?

Step aside, fellas. The bigger fight is about to occur with the pending nomination of Amy Coney Barrett to the U.S. Supreme Court.

The word is out that Donald Trump is going to nominate Judge Barrett to the court to succeed the late, great Justice Ruth Bader Ginsburg.

Barrett is a darling of the evangelical Christian community. She is a far-right winger who vows to throw out Roe vs. Wade, the landmark SCOTUS ruling that legalized abortion; she wants to toss out the Affordable Care Act; Barrett intends to make constitutional decisions based on the will of God … which is a tough call given that the Constitution is a secular document.

Ginsburg, of course, represented the “other” wing of the Supreme Court.

So, the fight will commence as Senate Majority Leader Mitch McConnell puts on his hypocrite hat and does the very thing he vowed shouldn’t happen, which is confirm a presidential Supreme Court appointment during a presidential election year.

Senate Democrats won’t sit still for it. Nor should they.

And in the House of Representatives, we hear faint rumblings of House members taking unusual steps to forestall this confirmation process until after the Nov. 3 presidential election.

The founders intended to keep the federal judiciary above partisan politics. As smart as they were, they could not have foreseen what we are about to witness up close in real time.

Let’s hold on with both hands.