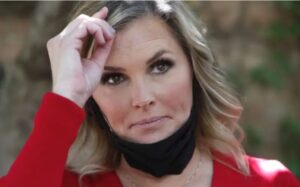 Is she qualified to serve in the Texas Senate? Not even close!

The Dallas hair salon owner is running for a seat being vacated by state Sen. Pat Fallon, who is likely to be elected to the U.S. House from Northeast Texas, succeeding Director of National Intelligence John Ratcliffe, the Fourth Congressional District’s former congressman.

I cannot ascertain how Luther will do when they count the ballots on Sept. 29 for the Texas Senate District 30 seat. I hope she loses the special election. She is trying to parlay her 15-minutes-of-fame status into a political office.

You will recall that Luther defied an order from Gov. Greg Abbott to close her business during the pandemic that is still sickening and killing Texans. Luther decided to forgo the mask. She was cited by authorities, she spent a little time in jail. She came out and hasn’t stopped talking since.

U.S. Sen. Ted Cruz came to Dallas from Houston to get a haircut at Luther’s salon. That, too, was a bit of political showmanship.

Whatever, Luther is another in a long line of grandstanders who seek to use their celebrity status as a pathway to public office. However, she does have some big financial backing. As the Texas Tribune reported: The conservative megadonor Tim Dunn is backing Shelley Luther in her Texas Senate bid with a $1 million loan, a large amount for such a race.

Look, she isn’t qualified. I would be willing to wager that she likely doesn’t know the first, second or third thing about legislation or how to legislate. But by golly, she wants to be elected as one of the state’s 31 senators.

Sheesh! Spare me the malarkey about a businesswoman seeking to “reform” the system of government.

I see her signs all over the place. In Farmersville. In Princeton, where I live. Even along the Central Expressway in McKinney and Allen. I haven’t seen any TV ads touting Luther’s desire to represent Senate District 30.

I am wondering what such an ad would trumpet: Elect the businesswoman who decided to break the law and expose herself and her customers to a deadly pandemic.

Blogger’s note: This item was posted initially on KETR-FM’s website.