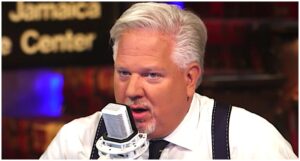 Glenn Beck has enlisted in Donald Trump’s hate-the-media regiment, proclaiming that those with journalism degrees are the “enemy of mankind.”

Well, with all due outrage, I want to counter that right-wing blowhard blather. Glenn Beck and those of his ilk are mankind’s real enemy. The enemy does not exist within the ranks of reporters who do their job with dedication, who risk their lives quite literally covering news in danger spots around the world.

The enemy happens to be, in my view, half-baked talk show gasbags who purport to be the font of all knowledge but who just have the gift of gab that enables them to spew their garbage over the air.

Beck needs to check his ego at the door.

The press is doing precisely what it always has done. It is holding government officials and others in power accountable for their words and deeds. They are performing an essential act in a functioning democratic system of government.

Shame on you, Glenn Beck … if you have anything in that ticker of yours that understands the word “shame.”