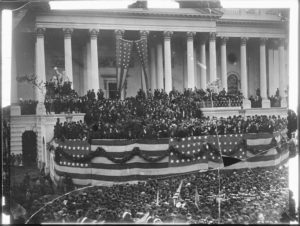 Given that Donald Trump has exhibited a seemingly bottomless pit of boorishness, I cannot get the following thought out of my mind.

Just suppose Joe Biden is elected the nation’s 46th president. Is it possible that the 45th president would skip the inaugural in a demonstration of maximum pique and petulance?

Trump keeps yammering about a “rigged election” in the event of a Biden victory. I cannot stop thinking about whether he truly believes it and whether he would be act on that belief by not showing up for the ceremonial transfer of power from one president to the next.

I mean, the Constitution doesn’t require the outgoing president to sit there and listen to the new one offer a grand vision of what he intends to do.

Moreover, it wouldn’t be an unprecedented act. President John Quincy Adams didn’t attend the inaugural for the man who beat him, President Andrew Jackson. But geez, that was in 1829! It was a bitter campaign and I guess Adams never got over the mean things Jackson said about him.

Other campaigns have produced plenty of bitterness. I recall the 1977 inaugural of President Carter, who in his opening remarks to the crowd, thanked President Ford for all he had done to “heal our land” after Watergate. That was a tough race, too. The men became fast friends for the remainder of President Ford’s life.

Donald Trump, though, harbors the deepest, meanest, most authentic sense of personal animus of anyone I’ve ever witnessed.

I will not predict such a thing from occurring, but merely am saying that should Joe Biden become President Biden, I wouldn’t be surprised to witness the ceremony occurring without Donald Trump anywhere to be seen … or (thankfully) heard.

One thought on “Would he dare skip the inaugural?”