“I would be willing to swear on anything that I never said that about our fallen heroes. There is nobody that respects them more.” 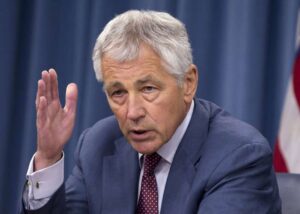 Do you believe the commander in chief’s denial that he denigrated and disparaged the men and women who serve in our nation’s military?

Yeah. Me neither. Nor does Chuck Hagel, the former Republican U.S. senator from Nebraska and former defense secretary in the Obama administration.

The source of this angst comes from The Atlantic magazine, which published a story by Jeffrey Goldberg citing four anonymous sources who reportedly heard Trump speak ill of those who were wounded in action, were killed in action or taken prisoner by enemy forces.

According to USA Today: Hagel, a Vietnam War veteran and two-term Republican senator, told ABC News “This Week” co-anchor Martha Raddatz that if Trump’s reported comments are “real, it’s beneath the dignity of any commander in chief. Truly they’re despicable.”

OK, Hagel is giving Trump a sliver of a benefit of the doubt on the remarks attributed to him in The Atlantic. I saw the ABC News interview and I came away from watching it that Hagel truly believes the remarks fit a pattern that Trump already has exhibited.

No, this story won’t go away any time soon. Nor should it. The reporting paints the commander in chief in the most hideous context imaginable.

I would accept Donald Trump’s denial, that he would swear on anything he could find. Except that his constant and relentless lying has destroyed all semblance of credibility.