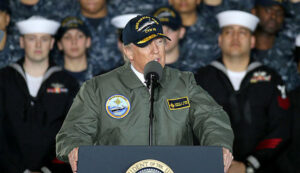 I once thought Donald Trump’s denigrating John McCain’s service during the Vietnam War would have ended his political career.

Or the time he ridiculed a Gold Star couple whose son, an Army officer, died in Iraq.

How about when Trump mimicked a severely handicapped New York Times reporter?

The coward survived all those missteps. He got elected president.

Now he reportedly has disparaged men and women who have been injured in combat. He calls them “suckers” and “losers.” He supposedly didn’t attend a ceremony at a storied World War I battlefield because the rainfall would mess up his hair. Trump reportedly stood at the grave of a young Marine who died in Afghanistan and said in the presence of the Marine’s father, retired Marine Corps Gen. John Kelly, that there was “nothing in it for him.”

Does any of this signal the end of Donald Trump’s hideous tenure as commander in chief?

Oh, I do hope that is the case.