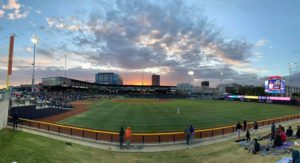 The Amarillo Sod Poodles were supposed to defend their Texas League title, but the COVID-19 pandemic put the kibosh on their season. Instead, the team ownership came up with an idea that sold quite well with the Sod Poodles’ enthusiastic fan base.

They formed two teams comprising college athletes. They decided to sell about 3,000 tickets per game played in the 7,000-seat ballpark, enabling fans to “socially distance” themselves while cheering for the young men on the field.

From what I understand, the makeshift season went over well. The fans got a good dose of baseball just when their hopes were dashed that the Sod Poodles would be unable to play even part of a season.

I consider this to be an example of quick thinking on your feet. To that end, the Sod Poodles’ management earns a bouquet from this former Amarillo resident. Well done. As one of the Sod Poodles fans said on Facebook:

Thank you to the coaches and players who came to Amarillo this summer to play America’s game. You guys just simply rock!! This season, as the old saying goes, was short but sweet! I know the fans in Amarillo are already anticipating another fun filled and exciting season in 2021! Go Soddies!!