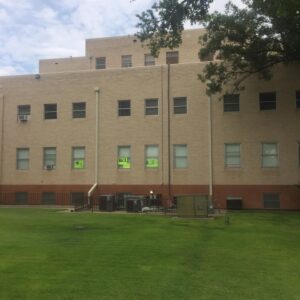 A bit of a tempest might be brewing up yonder in the Texas Panhandle, in a publicly owned county complex and I am trying to connect a few dots to make some sense of it.

Some Carson County employees have plastered “We Back the Blue” signs in the courthouse complex in Panhandle, the Carson County seat. I don’t know what “We Back the Blue” means to you, but to me it’s a dog whistle, one of those thinly disguised messages that carry a double or possibly triple entendre. The signs are hard to read in the picture attached to this blog post.

Thus, I am concerned that a publicly owned structure is being used as a forum for a partisan political message. What is the message as I see it being portrayed?

It is that suggesting that you “back the blue,” you support the police that have become rhetorical targets of the Black Lives Matter movement. You know the history, yes? BLM comes from the deaths of African-Americans at the hands of cops, some of whom have been charged with felonies in connection with those deaths.

If you “back the blue,” do you dismiss the BLM movement? Or do you support both the Black Lives Matter and the We Back the Blue movements?

Why am I even talking about this? Well, Carson County sits in the heart of Trump Country. Carson County voted overwhelmingly for Donald Trump in 2016 and is likely to do so again in 2020. Donald Trump, as you no doubt understand, has been highly critical of the BLM, calling it a movement based on “hate” for the cops.

Can you connect those dots with me on this?

“We Back the Blue” is a political statement that presents enough of a concern to me over whether it’s intended to denigrate another political movement. Therefore, it doesn’t belong in windows of a publicly owned government structure that must — under law — serve all the residents of that jurisdiction regardless of political leaning.

One thought on “Back the Blue = dog whistle”