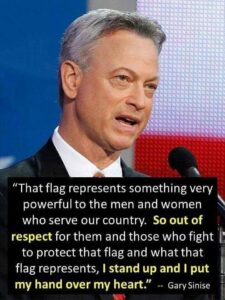 Check out this social media meme that showed up today. Read the text carefully … and then bear with me while I offer a brief interpretation of what it means to me.

First of all, I am a huge fan and supporter of Gary Sinise. I honor his commitment to our nation’s veterans and as an Army veteran myself — one who went to war for my country in the late 1960s — I thank him for his support; it means a great deal to me.

Now comes the “however.” He stands for the flag, puts his hand over his heart and salutes “what that flag represents.” It represents a lot of things to me as well.

It represents liberty, freedom, honor, sacrifice and the right of citizens to dissent, to oppose government policy.

So, when individuals choose to, um, “take a knee,” they do so in full compliance with what the U.S. Constitution allows them to do. The flag, thus, represents the Constitution, it symbolizes the greatness of this land.

One of the elements of our nation’s greatness rests in the rights we have as citizens to protest peacefully without recrimination from our government.

One thought on “Support the flag … and what it ‘represents’”