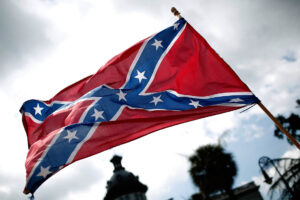 Donald J. Trump just cannot bring himself to acknowledge what a majority of American southerners now admit … that the Confederate flag symbolizes racism.

Oh, no. Trump declares the flag is a symbol of “Southern history.” Well, yeah. It is that. The history, though, includes the Civil War. I know Trump has heard of it.

The war began when the Confederate States of America decided it wanted to form a new country. To do so it had to separate from the United States of America. Then the rebels fired on the Union garrison in Charleston, S.C. harbor. The war was on!

The conflict killed more than 600,000 Americans. Yes, I include the Confederate forces as “Americans,” even though they committed a treasonous act by taking up arms against the federal government.

Why did they go to war? Because their states wanted to keep human beings enslaved. They wanted the right to “own” humans as property. It’s been referred to euphemistically as a “states rights” issue. It is no such thing. The CSA wanted to retain the right to oppress human beings.

They fought the Union forces under the Confederate flag that Donald Trump — the man who has no understanding of history and its complexities — says represents “Southern history.”

The Confederate flag well might symbolize “history” to many Americans. To many others it represents hatred, oppression and enslavement. It is no coincidence that contemporary hate groups — the KKK, instance — flies the Confederate flag while spewing hate speech aimed at African-Americans.

Is that worth honoring? Hardly.