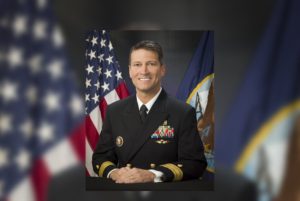 I hate what I fear is going to happen to the Texas Panhandle’s 13th Congressional District.

The district’s strong Republican ties are likely to hand the district over to an interloping carpetbagger who doesn’t know the first, second or third thing about the district. But he’s an R and that’s good enough for them.

He is Ronny Jackson, a retired Navy admiral, a physician (and former doc to two presidents, Barack Obama and Donald Trump). He doesn’t know Pantex from Spic ‘n Span, but he’s going to represent the district for at least the next two years after they count the votes in the November election.

I’ll get to the glimmer of good news in just a bit.

I maintain an interest in the 13th District, even though I no longer live there, because my wife and lived there longer than we have anywhere else during our 48 years of married life. The congressman who is leaving Congress, Mac Thornberry, took office the same week I reported for duty at the Amarillo Globe-News in January 1995. So I have told Thornberry that he and I “grew up together” in the Panhandle.

Thornberry, though, has deep roots there, growing up on a ranch in Donley County. So he knows the district he has represented for 25 years … unlike Dr. Jackson — a native of Levelland — who took up residence there only to run for the office he thinks is ripe for the picking. And he’s right.

But … here comes the glimmer of good news.

He won the endorsement of Donald Trump in his primary race. Indeed, Jackson — from all I’ve heard — has spoken only about his close he is to Trump, that he is wedded to the president’s agenda … whatever the hell that is.

The good news? Trump is on course at this moment of losing his bid for re-election. Bigly! He has bungled the presidency at every turn. He has clearly mismanaged the national response to the COVID-19 pandemic. He has sought to divide the nation. Trump spews racist-sounding thoughts.

It is my fondest hope that Joe Biden defeats Trump. If that comes to pass, then what becomes of Dr. Jackson’s main selling point he is using to land a seat in Congress? He likely will be hard-pressed to get the time of day from a Biden administration.

Would that mean it’s one term and then out for the doc?

I just know that my friends in the Texas Panhandle deserve a whole lot better from their congressman than they’re about to receive. At the very least they deserve to be represented by someone who knows the issues relevant to the region.