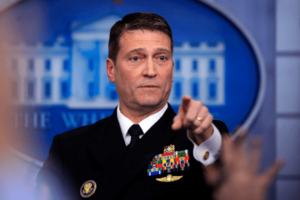 Oh, I hate to say this but it’s got to be said: The Texas Panhandle is likely to send a nut job to Congress to represent them and, ostensibly, their interests.

Thirteenth Congressional District Republicans this week nominated Dr. Ronny Jackson to run for the seat being vacated by longtime GOP U.S. Rep. Mac Thornberry. What makes this upcoming contest so fascinating to me — a former 13th District resident — is that Jackson knows next to nothing about the district he likely will be elected to represent. I mean, he’s never lived there … until just in time to run for the House.

Jackson was born in Levelland. He joined the Navy, became a doctor, rose to thank of rear admiral, tended to two U.S. presidents — Barack Obama and Donald Trump — and then retired from the Navy after Trump sought to have him become the secretary of veterans affairs. The nomination didn’t go well. It turns out Jackson has no administrative experience and he also allegedly got caught prescribing drugs in a rather cavalier fashion.

He pulled out of the running for the VA job.  He sought a safe Republican seat and found one in the Texas Panhandle. Thornberry announced he wouldn’t seek a new term and in jumped Admiral/Dr.  Jackson.

He’ll run against the Democrats’ latest sacrificial lamb, Gus Trujillo, who beat a friend of mine, Greg Sagan, in this week’s Democratic runoff.

Now, though, it gets even more interesting. Dr. Jackson says face mask wearing should be an individual choice and has downplayed the importance of face masks in the wake of the COVID crisis that is killing Texans every single day.

I am quite certain that Ronny Jackson’s lunacy quotient doesn’t measure up to that of the guy who nominated him to be VA secretary … but statements like the one he issued about face masks make me wonder.

Texas has elected too many wackos to Congress over the years. The nuttiest of them all is Louie Gohmert, the East Texas birther conspiracist; a close second might be John Ratcliffe, the former Northeast Texas House member who happens to be the current director of national intelligence.

Step aside, gentlemen. You’re about to be joined by a medical doctor/carpetbagger who well could put your wackiness to shame.