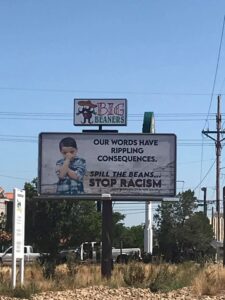 I am seeing this drama unfold from some distance, but given my history with Amarillo, Texas, it isn’t as far as many other communities on which commented regarding similar issues.

A local lawyer, Jesse Quackenbush, wants to open a Mexican food restaurant called Big Beaners. It has, um, drawn considerable opposition within the community. Why? The term “beaners” is perceived by many Latinos to be an ethnic slur. Some of us Anglos see it that way, too.

Quackenbush, known for his feisty and occasionally combative nature, isn’t backing down. He wants to open the joint in early July; I understand he pushed the opening date back a few days.

He said he isn’t going to change the name because he already has ordered restaurant supplies — napkins, cups, plates and such — with the name Big Beaners inscribed on them.

This story, it seems to me, is a direct result of the rising public awareness of racial and ethnic sensitivity that has been pushed to the front of our consciousness. I haven’t spoken to Jesse Quackenbush about this, although I do understand he is digging against the racism allegation.

I just would suggest that the term “beaners” is a term that has racist connotations to many of us who hear it. I wish he would rename the restaurant he intends to open.

We return to Amarillo on occasion to see family and friends. I guess I should just acknowledge that I won’t darken his door as long as the establish carries a name that I find offensive.

4 thoughts on “Racism takes many forms”