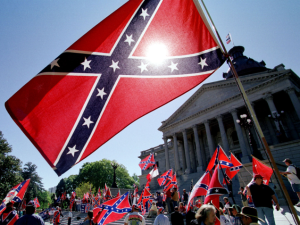 So much for the “heritage” and “history” argument for flying the Confederate flag.

Let’s consider “hate” as well, shall we?

NASCAR driver Bubba Wallace, the only African-American driver among the top tier of drivers in the popular sport, recently led the call for NASCAR to remove the Confederate flag from its events. NASCAR listened and issued an order banning the flag that is the symbol of the Confederacy, the group of states that seceded from the Union in 1861 and went to war with the U.S. of A. They went to war because they wanted to preserve states’ rights to sanction the enslavement of human beings.

Not all of NASCAR’s base of fans is happy with the removal of the flag. They disagree that it symbolizes racism, that it merely reflects people’s respect for their “heritage” and the “history” of the nation.

Well, what do you suppose happened over the weekend?

Someone got into Wallace’s garage at a Southern track and left a noose. Hmm. Heritage and history … my a**!

You know what the noose represents. It represents hate in a raw, despicable form.

Let’s quit the crap about the Confederate flag symbolic importance to people’s heritage and the nation’s history. The flag represents a disgraceful chapter in America’s story.

One thought on “Toss in ‘hate’ to replace ‘heritage’ and ‘history’”