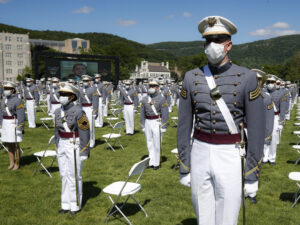 “No force on earth can match the noble power and righteous glory of the American warrior.”

I just cannot let stand the remarks by Donald J. “Draft Evader in Chief” Trump without a brief comment on their sheer and blatant hypocrisy.

Trump spoke today to graduating cadets from the U.S. Military Academy. They had scattered far and wide, but Trump summoned them back to listen to his remarks at a socially distant commencement ceremony in Upstate New York.

Yes, we have had draft dodgers serve as president. Bill Clinton bobbed and weaved his way out of serving during the Vietnam War just as Donald Trump did. Trump got a doctor to tell the future president’s draft board that the rich kid couldn’t serve because of “bone spurs.” Trump said he “never was a fan” of that war. No sh**, dude? Neither were others of us … but we served!

Now, after dismissing and denigrating the generals and admirals who run our military, after co-opting their mission by threatening to use them to put down domestic protests and to serve as border cops to stop a phony “caravan” of refugees, he salutes these newly commissioned officers as possessing “noble power” and “righteous glory.”

This commander in chief sickens me.