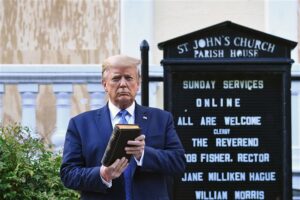 Don’t accuse me of overstatement, because I believe in what I am about to pronounce.

It is that we are witnessing an unprecedented rebellion among former general-grade military officers who once worked at the highest levels of the chain of command. They are rebelling against the astonishing ignorance of the current commander in chief.

The first of them to speak out is the former defense secretary and retired Marine Corps general, James Mattis. He has accused Donald John Trump of being a threat to the U.S. Constitution. He said he is witnessing for the first time in his storied military career a president who is making no effort to unite the country, but is working diligently to divide it.

Then came the endorsement of Mattis’s comment from another retired Marine general, former White House chief of staff John Kelly.

Then we heard from retired Army Gen. Martin Dempsey, the former chairman of the Joint Chiefs of Staff along with another Joint Chiefs chairman, retired Admiral Michael Mullen. They, too, are appalled at Trump.

Joining them was the former Admiral William McRaven, the special operations command boss who coordinated the 2011 raid that killed Osama bin Laden. He blasted Trump over his clearing the streets of peaceful protesters so he could stage that hideous photo op in front of St. John Episcopal Church … when he held the Bible in front of the boarded-up house of worship that had been damaged by rioters.

Current Joint Chiefs Chairman Army Gen. Mark Milley and current Defense Secretary Mark Esper have bolted from Trump’s decision to send active-duty military personnel into our cities to put down protesters rallying to decry police brutality in the wake of George Floyd’s hideous death at the hands of rogue cops.

The custom has been for retired general-grade officers to keep their political views to themselves. Since custom has been tossed aside by Trump, then I left to presume the former officers feel unrestrained these days from speaking their minds.

All of this, these men say, is antithetical to the very notion of our Constitution, of the principles on which the founders created this nation. The president seeks to dispatch members of the world’s most destructive, most lethal military force to work against citizens who are guaranteed constitutionally the right to seek redress of government policy.

Yep, we have a dangerous man at the helm.